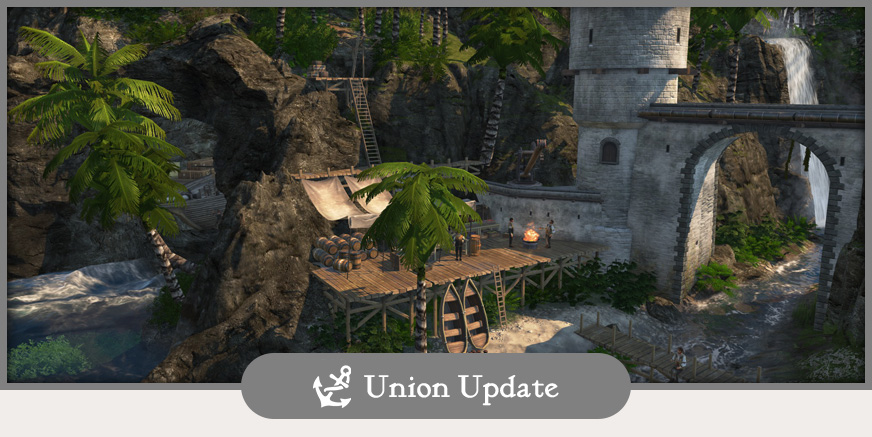 Union Update: Look to the horizon

We are sorry for last week’s interruption; we found the culprit and made sure that he is under custody for his disruptive behavior, at least for the time being. We will ensure that we keep a close eye on him in the future, but we have a bad feeling that we have not seen the last of our dear friend, the Acolyte.

With only two months until the end of the year and four months up to launch, what is going on in the world of Anno 1800 and the Union?
As mentioned in a previous blog, game production is keeping our team very busy right now. We are currently working on our big Beta milestone, which means that by January, the game will officially reach Beta state, with all game elements and content fully playable. During this busy time, we are working on many aspects of the game, from polishing up buildings, balancing quests and checking thousands of voice lines to be recorded in a variety of languages:

We are also oiling the cannons and waxing the planks in order to bring you an exciting and insightful naval warfare blog before the end of the year. To get you in the right mood for your tense naval battles, this week’s DevBlog will shine a light on the pirates of Anno 1800, who cling on to tales and legends from a time long gone. They say the age of piracy, but their last stand is yet to come…
We are also busy laying the groundwork for our previously announced large-scale technical test with many more Union members (sign up!) and reviewing your contributions to the Expeditions contest.

The next episode of our AnnoCast is on the horizon!
The AnnoCast will make its (hopefully much anticipated) return next week Thursday, November 8. We heard many of you say that you want to see some proper gameplay and therefore decided to settle on a new island to show you the Farmer and Worker lifestyle. Let us see how far we ca get during our stream! As always, we are happy to answer questions both from the chat as well as from the Union, so leave us anything you want to see answered in the comments!

Save the date and join us next week Thursday, 8th of November for the next episode of our AnnoCast show on: twitch.tv/ubisoftbluebyte

Let’s wrap up this week’s community update with another Community Q&A:

Fightfor3dom
Will you be able to enable/disable the pirates or set a game difficulty for a pirate difficulty? Or will it be just another enemy? Which city incidents will happen on the three different difficulty levels?
Answer: Second-Party characters all have their own difficulty rating, which in many ways reflects their personality and behavior. As third parties don’t directly compete with the player in military or economic warfare, they won’t affect the difficulty of your session. However, pirates are an exception, as they work actively against the player and even other AI. You will be able to choose the pirate characters for your session or even exclude the pirate characters from your match. For now, the two pirates have a set difficulty although both characters have different personalities and therefore, react differently on your actions.
When it comes to city incidents, fire, strikes and illness will haunt your metropolis while their frequency is based on the difficulty setting of your match. We will show you that system in detail in a future DevBlog, as especially strikes are an exciting new feature in Anno 1800.

kuskram
I like that you have so many options to create your custom session. I am also happy to see that the random generator in combination with the seed codes makes a comeback. But there is one question for me: in vein of older titles such as 1701, will the game have a world editor which allows us to place our own islands, fertilities, resources or starting position?
Answer: We focus on the core features on the game, as we want to deliver true quality for old and new fans of the series. Therefore, there are currently no plans to develop a World Editor for Anno 1800. replayability is one of our top priorities, the game will release with over 50 handcrafted islands, and many of them come additionally with their own island variations.

mige0410
Where are the female characters in the old world – or will I be forced to only deal with men as long as I manage to escape to the New World in order to meet the female cast?
Answer: The world of Anno 1800 will be populated by a diverse cast of characters, among them Women and Men with their own special personality, which will mirror in their behavior when building cities or their reactions in our diplomacy system. You will also be able to choose your own player portrait, where you can decide, among other things, to choose a female or male portrait.

AyroV
Will we be able to set the map small/medium if we want to play multiplayer with multiple people? Anno 1404 does not allow us to choose map size accept huge when we try to play with 4 players.
Answer: Yes, you will be able to play on small maps with 4 players or non-player characters. But beware, on a small and densely populated map, there will be a lot of competition about the control of the more precious resources if players want to reach the fifth residential tier.

dAprillion
I like it when I have 2-4 options (easy, med?, hard, insane?) with useful defaults for the main mission?
Answer: You won’t need to dive into the custom match settings and can also choose one of the three pre-defined difficulty options:
Normal Mode: Will provide you a large world and island space, rich mineral deposits, challenging but not too hard opponents and free relocation and full construction refunds.
Advanced: Less money, harder opponents and an average world and island size. Many smaller options such as relocation of buildings won’t be free anymore.
Expert: This one will get you on your toes, only a few coins in your pocket while fighting for every single yard against the most cruel and efficient enemies on small and everything else than fertile islands.