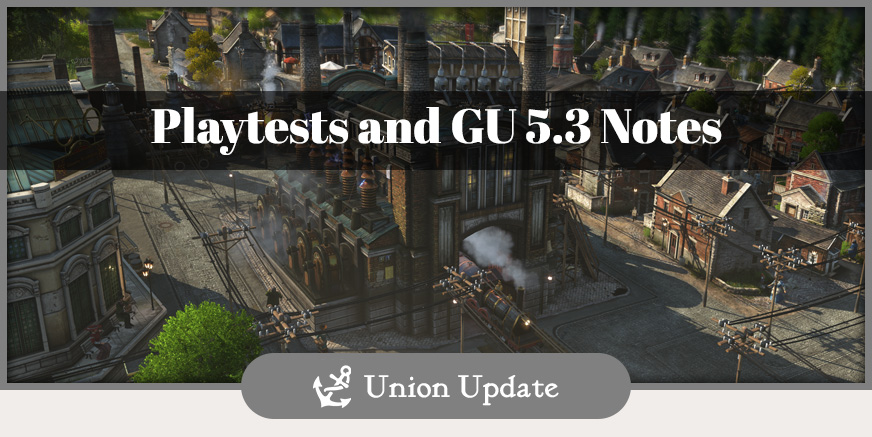 With the release of Game Update 5.3 next week, which was supported by some community members helping us by testing and providing save games affected by issues, we will address the most aggravating issues currently in the game. In addition, with further testing throughout the month of November, we plan to leverage the knowledge of our community once more for “The Passage” and Game Update 6.

Game Update 6 and “The Passage” playtest coming in November
Game Update 6 will not only include the co-op mode and statistics feature, it will also release alongside the third and final (not to mention biggest!) Season Pass DLC, “The Passage”. For that, we once more want to invite some testers from the Anno Union to further polish the game experience based on your feedback.

We will test a variety of content and different features to gather data about the stability and quality of Game Update 6. As such, this playtest will be longer than our previous tests, and we are planning to invite several groups throughout November.

The test will be under a strict NDA (Non-Disclosure Agreement) and we will provide access to a closed tester forum for all invited players to discuss and share their feedback.

If you are interested in participating in this playtest, please send an e-mail to union-playtest@bluebyte.de, including the following data

Players who applied and participated in the last co-op test will be automatically added to the pool of potential candidates for the upcoming test. If you applied for the last test, you will not need to send us a new application mail.

We will provide all further details, such as when the test start, how to access the test build and where to post feedback, to the first wave of participants at the end of the month.

Bring the spirit of October to your cities with the new Halloween billboard ornament.

We have adjusted Hugo Mercier’s Anarchist main story quests, to make them less random and more dependable for players. Here is all you need to know about how these quests will work, going forward:

We have fixed several issues that can lead to trains being stuck in the oil harbor.
However, in the spirit of transparency, we have to say that this has been a very difficult issue to pin down and reproduce, even after analyzing several affected save games from the community. As such, we cannot conclusively promise that it will not appear again in some fringe cases.

Fixed an issue that prevented oil tankers from being manually loaded/ unloaded at oil harbors.

Fixed a separate issue that could prevent oil tankers on trade routes from loading/ unloading properly.

Fixed an issue with entries in the ship list constantly switching places or flickering.

Fixed an issue with duplicate, unnamed ships being stuck on the world map.

Fixed an issue with ships drifting away from their position by themselves.

Fixed an issue with ships on trade routes being stuck on a map border.

Fixed an issue with players being able to see the object menu of a chartered ship.

Fixed an issue with selecting ships for an expedition in the preparations menu.

Ships returning from expeditions will now correctly return to their homeport from which they started their expedition.

Fixed an issue that could change your influence points balance after saving and loading a save game.

Fixed an issue with AI characters having large fleets of duplicate ships.

Fixed an issue with quest objects spawning at sea.

Fixed an issue with quest giving ships not despawning, and subsequently crowding an NPC’s harbor area. Unfortunately, this issue will not remove already spawned ships retroactively. Workaround: Ignoring one of the NPC’s quest chains (quests that have “Part 1, 2, etc.” in their name) will remove all redundant ships.

Fixed an issue in campaign mode, where some of the queen’s ships could become controllable by the player, which could block campaign progress.

Fixed an issue with quest hint bubbles not being correctly removed, and pointing to invalid positions.

Provided a fallback solution for the Sunken Treasures expedition to unlock Cape Trelawney not triggering properly. This will now unlock the new sessions without having to complete the expedition beforehand.

Fixed an issue with duplicate ships being incorrectly applied to AI trade routes.

Fixed an issue with the campaign quest “Sovereign Aid”, which could lead to a blocker if the player failed the quest.