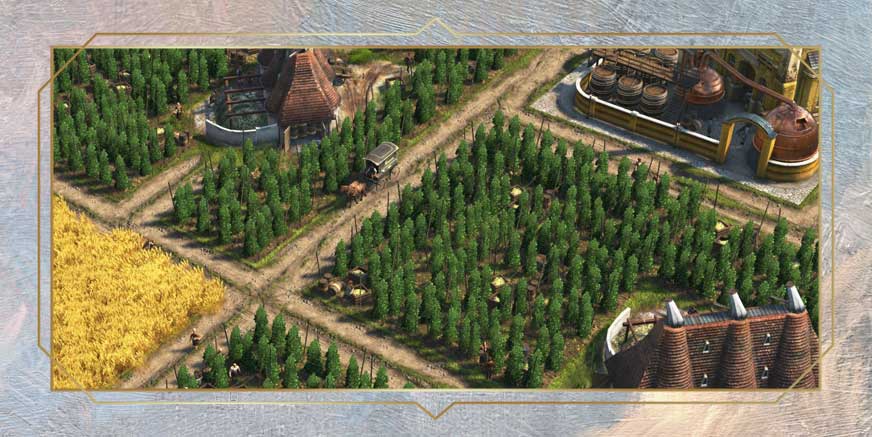 DevBlog: Treasures of the soil

From rags to riches – your industrial machine shall never rest when your soot-blackened empire rises into a glorious new era. Manufacturing the first goods is easy enough but soon, you will manage a complex logistical network to ensure a steady flow of resources for your hungry industry.

Today, our Game Designers Christian and Sebastian illuminate our lodes and fertility system, which are kicking off a series of posts focusing on the focal point of Anno 1800’s core gameplay: production chains.

In the first stages, Anno is dominated by simple production chains, such as establishing a basic food supply. Harvesting natural resources such as capturing fish at your coastline or chopping wood is enough to get things rolling. But soon enough, your small settlement will start to expand and production lines will become more complex. When your production will be evolving into a real industry, it will start to require harder to find resources.
Fishing and lumbering won’t be enough anymore, when advanced goods will require you to grow various crops or to tap into the mineral deposits on your island.
The growing complexity of the resource management is an important challenge when progressing through the game and soon, you might realize that the conditions on your main island are not enough to support your demanding society.

Reaping the harvest – Fertility
In the real world, every plant has certain requirements in order to grow properly. The right enrichment of minerals in the soil determines the fertility for certain crops and other plants. Additionally, there are other ground and weather conditions which might affect the fertility of the soil.
Agriculture makes up a big part of Anno’s production chains, but we simplified the complexity of Mother Nature and translated the concept into our fertility system.
In Anno 1800, not every plant will grow on any island and players have to seek out other isles with the right prerequisites. When progressing, you need to either settle on other islands or establish trading routes in order to improve your production. The scarcity of some resources drives the economic aspect of the game and fuels conflict between different factions that compete over the most interesting islands. Later in the game, we will give you options to have an impact on the fertility of your island. But that is bound to a different feature, which we will highlight in a future blog post.

Have a look on our hops production – the beer must flow!

Earth riches – lodes
In general, lodes work similarly to fertilities with a few additions. Lodes are mineral deposits on your island, with ores like iron found in mountain ranges, while some others, like clay, can be found in a pit rather than a mine. There is one major difference with the fertility system. While you can cultivate crops and other plants at any spot if the needed fertility is provided, you have to construct your mining buildings on fixed deposits, which will get randomly generated with each new game.
That means that you have to build your coal mine on an actual lode and cannot freely start mining anywhere. In difference with fertilities, you won’t be able to add or change existing lodes during a session. The location of the lodes on an island play a role in your strategy when designing your city, as they create a natural center for your production districts. Will you create your district effectively around your mining area or will you decide to make use of a clever supply line for your distant factories to avoid having your heavy industry close to the city center?
To account for the effort you put in to optimizing your city layout, lodes won’t deplete after time, unlike in Anno 2070. We don’t want to force the player to completely re-arrange an already complex supply line.

Coal for the thousand fires of the industrial revolution

Resource restrictions and their gameplay importance
The fertility and lodes system can have a major impact on the gameplay, as the players need to make important decisions based on the availability of the necessary resources:
When is the best moment to expand? Should I rush for other islands to dominate the fight for resources or choose a more laid back approach, where a small outpost or a trading network will do the job?

How you tackle on expansion, diplomacy, trade or even the size of your empire, depends on your approach, define your playstyle and let you set your own goals for a match.
We want to encourage different approaches and never take away your free will. You should not only decide how you want to play the game, we will also allow you to modify the difficulty of the game based on your preferences. Higher difficulty settings will make resources more rare while easy settings ensure that you don’t have to worry about fertility too much.

But that’s it for today, a good foundation for us to build upon in the upcoming weeks. Whether you are a veterans used to fertility and lodes systems or new to it, we are curious to read your feedback in the comments below.