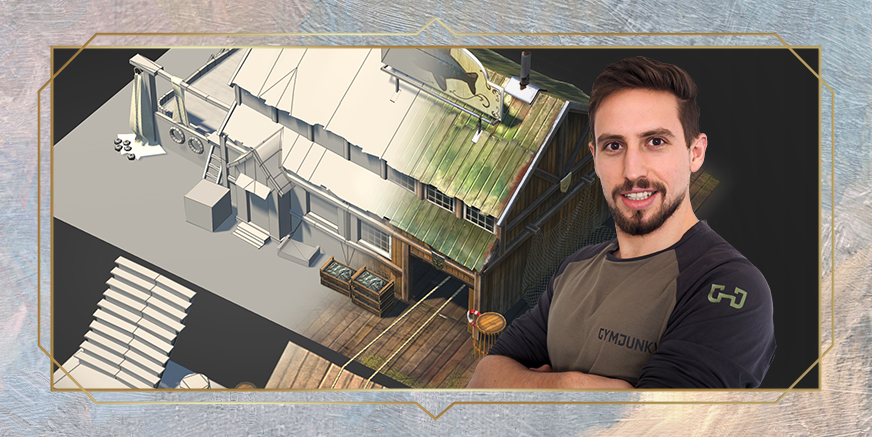 Take a second, close your eyes and think about Anno. What is the first image that comes to your mind? Probably hundreds of detailed buildings, swarmed by citizens following their daily life and a majestic view over a formerly untouched island paradise. But how do we create all of this, and how does it come together as a detailed panorama of a model city? In today’s Devblog, our 3D Artist Rolf Bertz will show you how we create the detailed world of Anno, starting with nothing but many ideas and a few simple shapes.

Hi, my name is Rolf, and I am a 3D artist working on Anno 1800, after having joined the team almost five years ago. My first job was as a Concept Artist on Might and Magic Heroes: Online for half a year, before a personal dream came true and I moved over to the Anno side of things. During my work on Anno 2205 I slowly transitioned over to 3D art and becoming a character artist. These days, I enjoy creating lots of buildings for Anno 1800.

First Steps / General understanding 3D Assets
You probably remember our first behind the scenes art blog about the work of our concept artists, which already gave you a first glimpse at the first 3D work, which we create for new assets. But before I start exploring the whole process of 3D asset creation, we need to explain an important thing: what is the job of a 3D artist, and is it all just about buildings?

Strictly speaking, a 3D artist creates three-dimensional assets, but things are a bit more complex when creating a big strategic city-builder like Anno. While there are 2D graphics such as UI elements, the majority of them are made out of polygons. To be able to manage such a big library of 3D objects, many of our artists are specialized in certain types of 3D asset or production processes. We still talk about an Anno game, so many of our 3D artists are of course mainly busy creating buildings as they make up a huge part of our total asset library, but there are also artists responsible for vegetation, islands, wildlife or special effects. Creating all these other elements might be an interesting topic for the future, but with this first 3D blog, we want to focus on what takes up the majority of our time. Without further ado, let us see how we build an Anno building from scratch.

Step 1: Where do we start?
Let us talk about that 3D mockup from the concept art DevBlog for a second. The first 3D step in a creation process plays an important role in the decision process and helps to shape the final concept art, which will later serves us well when creating the final building in 3D.
Building that 3D mockup starts when we get the scribble from our concept art team. Based on that concept, we will start to block out the shape and overall look of the asset. While the process is simple at this point, as we are not wasting time with too many details, the mockup helps to get a feeling for the overall look and proportions of the building and with that, see if the concept fits with the overall art-style or blends well in to our cityscape. Our goal: the building needs to blend in while the player still needs to be able to identify its purpose in the blink of an eye.

Step 2: Now the real fun begins
The next step starts when the design receives its final approval and we get the finished concept art to start creating a high polygon asset of the building. There is a common saying between 3D artists that at this point, you become architect and construction worker at the same time. At the beginning, you have to decide which basic shape seems to be the most prominent in the concept. For buildings, that is mostly likely going to be a cube. With our newly spawned cube, we start to alter its shape systematically. During that alteration process, you add more details and other shapes, which you then merge into the object, until it resembles the basic form and shape of the building you want to create.

When your structural work is done (including walls, rooftop and all the other necessary parts), it’s time for the detail work. With a high polygon asset, that means a ton of details: from the smallest bits like shingles on the roof up to every crack in the wall and from brickwork up to grain on wooden beams. At this point, our assets consist of sometimes over a million polygons (as mentioned, ALL the bricks, cracks and so on). Imagine you build your city out of hundreds of these highly detailed buildings, consisting of millions of polygons each. Sounds like a rough ride for your PC hardware.

Luckily, there is help on the horizon, which ensures that we will have nice looking details in the game while not tanking the performance of your PC into the ground.
So what we do now is to take the high polygon model and create a low polygon version of it, where we reconstruct the high detailed shape in a simpler version. To get an idea, one grid in Anno has a limitation of 250 polygons and a texture resolution of 256 pixels. That also means that we have a bit more leeway with bigger buildings, which have more grid space available.
With our newly created low polygon asset, it is time to quite literally skin the high polygon version of the building in a process called UV unwrapping.
To keep it simple, the surface of a 3D model is actually a flat 2D plane. In order to create that “skin”, we cut the 3D object at the edges, open it like a cardboard house and put everything flat on the ground. As a result, we get kind of a skin or blueprint map of your 3D asset, which we will need in the next step.

Step 3: Baking, anyone?
The next step is called baking and has, unfortunately, nothing to do with cake. In order to get our “skin” with the high poly details on the low polygon building, we have to “bake” the high definition shape on it. Imagine putting a highly detailed skin on a low detailed model underneath, where we keep the simple polygon groundwork but the surface will gain depth and detail. The result of that baking procedure is called a “normal map” where all detail and even lighting to a degree is embossed into the skin to create the illusion of depth. It is like staring at a wall and seeing all its holes, bumps and unevenness while in reality, it is a completely flat surface.

Step by step, a high poly model is turned into a textured Anno building

Step 4: Let’s bring in the textures
We are getting closer to the final asset and now it is time for some shader work. With the use of shaders, we can define the various materials, which our building consists of. As an example, we define what is wood or metal and even how the surface reacts, like if it is shiny or worn down surface. After we defined the substance of each part of the asset, it is time to paint it. For that, we have to do some research in advance, as we need to know how materials like burned brick look up close or what would be a fitting color for a rooftop in that age. Metal can be especially tricky, as we have to consider reflections. The best way to explain that is probably gold, as its natural color is actually a yellow tone and the reflections gives it the metal shiny look we are so familiar with.

As with concept art, we use inspirations of that time while our assets still need to convey that special Anno feeling and look. We also have to check how the colors and texture look when you watch your city zoomed out. Keep in mind that an Anno player spends most of the time watching his city from a bird’s eye view and we have to ensure that they look great and harmonize at a larger scale while still looking good when you watch your city up close.

Examples of the different texture maps, which affect things like the perceived depth or shadows

And this is what we do
Our asset is now a detailed, textured and nice looking building, but we are not quite done yet. There is still a lot of work to do, from alterations based on feedback, fixing smaller and even bigger issues and – not to forget – bringing the asset to life with animation work. Nevertheless, we now have a nicely detailed and optimized asset and that might be enough for today, especially as the next steps are a job for one of my colleagues. So how about a second part where 3D Artist Carsten explains how he breathes that crowded living feeling into the world of Anno?

So what do you think? Do you like zooming in on your cities to see all the little details we put into our buildings’ textures, animations and of course the citizens, or do you spend most of your playtime zoomed out as far as possible to keep an eye on your entire city? Let us know in a comment, and until next time,