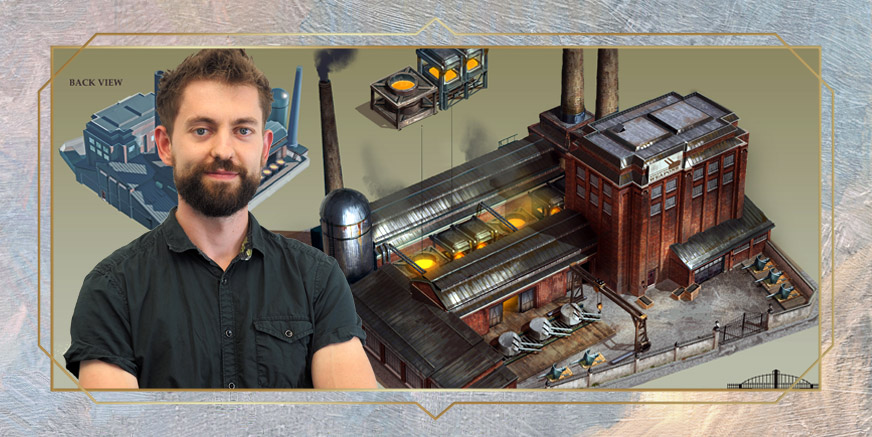 DevBlog: It begins with art!

“That typical Anno feeling!” – A common comment from long time Anno players when they talk about the very special feel and look of an Anno game. But how do we actually go about designing that familiar Anno art style? It all starts with concept art and today, we want to give you an exclusive look into that work with our Senior Concept Artist André Kieschnik:

Hi, my name is André, and I have now worked as a concept artist on the Anno series for over seven years. From my first Anno steps (or lines) in the middle ages to exploring settings on a futuristic earth and now arriving in the industrial revolution, this journey was a chance for me to earn experience as an artist and to learn many things, some of them are valuable lessons for my craft and career. I want to share a part of said experience with the Anno Union and show you why concept art is important.

Three factors that make for good concept art
Gamers loves concept art, as it gives us a glimpse into the creative vision and direction of a game; but it is not only an eye-catcher, it is also an important part of the development process of a game. Concept art sets the tone for the art direction, helps to visualize concepts and works as reference piece for other departments. You can say that there are three important factors:

Visualization
We talked about the vision for our game in the past, and it is the concept artist’s responsibility to take all these creative ideas and to visualize them. That can be straightforward, like the first concept sketch of a new building, environmental concepts or a panorama visualizing how a whole cityscape could look like. But we also create mood slides, where we capture a certain atmosphere or feeling into a concept art piece, and work sometimes with abstract ideas to get them into form and shape. Visualizing ideas helps Game Designers (but also other disciplines) to get an idea on how game elements could look like, but also to figure out if and how they could function in the game.

Functionality
Functionality is another important factor. Sometimes, an idea sounds great in our mind but once we can see it visually presented in an artwork, we might realize that it is not working out as we hoped or that it needs at least some more thought and iterations to function properly. Imagine you have an idea for a new crazy factory building or a cool 19th century machine. A concept artist can help to figure out if that concept for a factory could work well together with the other buildings in the game or if the design of your machine feels plausible and convincing. Our credo here is “not 100% realistic but believable”. We take advantage of creative freedom when creating concept art but the right mixture between reality and fiction is what makes an asset believable.

Art Design
Finally yet equally importantly, concept art helps to set the visual tone for a game. Having a set art direction is crucial to create that beloved Anno feeling. So what exactly is the tonality and feeling that we are aiming for with the upcoming Anno 1800? The 19th century with its industrial revolution was, especially in large cities, often a dirty and sometimes gritty time. However, as with our Anno games set in the middle ages, the tone for Anno 1800 should reflect memorable aspects of that era without becoming too dark or dirty. For an Anno game, we all want that sense of satisfaction and wonder when observing our citizens bustling around a carefully crafted diorama of a city.

Which of course does not mean that Anno 1800 will not give you that soot-blackened feeling of the 19th century, as the depiction of the industrial revolution is an important part of immersing players in that that era.
At the end, artful architecture, rural buildings and industrial revolution should create a harmonious overall architectural impression. A good mixture allows us to represent everything, with vibrant cultural buildings or other eye-catchers compensating for your brick-stone factories covered in industrial smoke.

Step one: Hitting the books
We always start with research. Anno is a city building game and therefore, architecture is the most important aspect we have to visualize. Our team usually starts to browse through various sources from that era, like old photos or paintings. Over time, we gather a good amount of reference material. However, it is not only the 19th century we take inspiration from.
When you do research about production buildings of that time, you quickly realize that many buildings were mostly made out of brick stones and all shared a similar architecture, which makes it hard to distinguish various types of buildings or their functions at a glance. We of course had to admit repetitive buildings made of red brick stones are not very interesting to look at, or not even what people expect when they think of the industrial revolution.

That is the point where creative freedom becomes important: we are also using modern references to include steel and iron, which most of us imagine when we think about the 19th century.

Step two: Time to scribble
The first visualization of a concept is usually a sketch. Let us stick to the factory for this example. We are done with our initial research and can now start to scribble down all the ideas we have in mind to create many variations in shape and form. At this point, while being rough, our scribbles should demonstrate various shapes that could fit in an Anno landscape but also show what is inside the building.

Here is something interesting to consider when creating buildings for Anno. When you take a birds-eye look on a real cityscape, it is hard to identify the various types of buildings. You might be able to spot houses, if it is some kind of cultural building or an industrial estate of sort. In Anno, we need you to be able to easily identify the type of building you are looking at. To immediately make you understand the type and function of a building, we make use of open walls or we even place elements that should be hidden inside the building (like big kettles or a smelter) outside to make it more readable.

We usually draw several sketches to create a variety of concepts for a building. In previous Anno games, the first sketches were usually black and white line-arts. However, our team got more experienced and with that, much faster over the years. That means that today, most of our scribbles already have some coloration to give a better idea how things could look like in the final game.

Step three: Decisions
Once we have a variety of concepts, it is time to pick the most fitting sketch of the building. Our team decides which sketch would work best as a concept for a building, with feedback from our Art and Creative Directors and Senior Artists. There might be a case where we have a hard time deciding on one sketch, which can lead to picking two variants or even mashing them together to create a new concept. Once we have picked the best concept, a 3D Artist will create a low-poly 3D Mockup of the factory. That allows us to compare it to already created Anno buildings and helps to identify if size and proportions are working or if we have to alter the concept a bit. After we have checked various scenarios with our 3D dummy and decided that we can go ahead with the concept, it is time to go back to the drawing board.

Step four: Let’s finish this
In the last phase, we take our first sketch and start to work on the final concept art. That means a lot of detailed work: we create a high definition file, work out all the missing pieces such as props, small details (which can be as minute as a poster on a wall) and define all the materials used in that building. It needs to be clearly visible what is made out of bricks, wood, metal and even if it is in a pristine or worn down form, especially for the later work with shader effects. Having all the details and the correct proportions is incredibly important as a reference for our 3D artists who work with that concept later on.

When the final piece is ready, it is time for the last approval check. If we get the okay from the Creative Director and Senior Artist, it’s time to move on to another piece. If the concept art needs to be changed after the revision, we usually go back to the beginning of step four.

I hope you found this behind the scenes look into the world of Anno’s concept art interesting. In a future Devblog, one of my fellow artists from the 3D side will take over to show you how our factory continues its journey into the finished game. Before I leave you, I would love to hear what some of your favorite Anno concept arts from the previous games were, so hit the comments. You might have even a few questions to our team regarding our work on the concept art for Anno 1800?