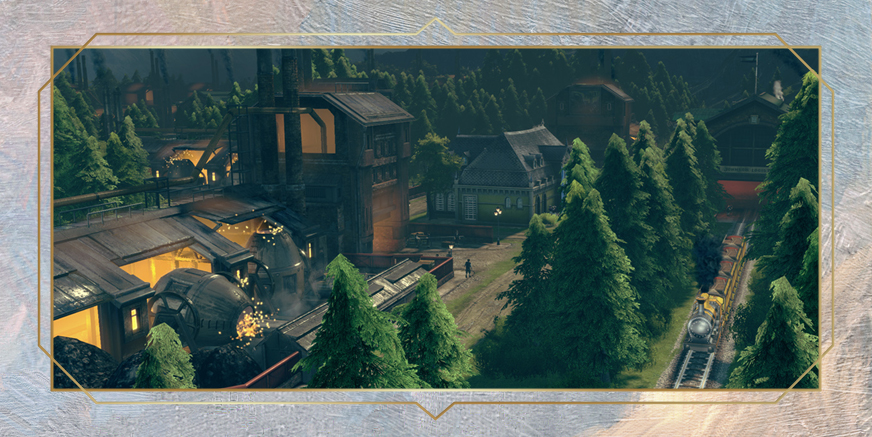 With a nearly 20 year history for the Anno franchise and 6 games in the series, creating the vision for Anno 1800 was not an easy task. We would like to take you on a journey with us, showing where we are coming from, our promise for Anno 1800 and how we want to achieve our goals for the game.

For almost 2 decades now, the Anno name has been synonymous with deep, high-quality city-building games made in Germany. While the first four games in the series all took place in historic settings, we took a step to the future with the release of Anno 2070, exchanging beloved series staples like fishing huts for futuristic metropolises on land and even under the sea. And in Anno 2205, we allowed players to settle simultaneously on various points around the globe as well as on the moon.

While many of our players enjoyed the new technological possibilities that these futuristic settings allowed for, others were asking for a return to the series historical roots, and the classic Anno gameplay of titles like 1404.

When working on the first concept, we created a list of all the beloved Anno features, based on our experience and especially the feedback from our community. The new Anno should combine the strength of classic titles with all the new possibilities coming from our experience with the latest games. We build the foundation for Anno 1800 out of these features and decided, that these features have to be in Anno 1800 from day one to create the game our fans are waiting for and possibly the biggest Anno game in the series.

Many of you stated that you enjoyed first hours of Anno 2205 but that you were missing complexity, replayability and the challenge for veterans of the series. Because of that, it was clear to us that we need to focus on rich and complex gameplay while making the game still accessible for new fans. With Anno 1800, the series not only returns to its historical roots, but also delivers the full Anno package on day one, including many of the features that long-time fans missed in Anno 2205, such as sandbox mode, physical goods, classic Anno multiplayer, randomly generated maps, trade routes and a military fully integrated into the main game. Third party AI, an in-depth diplomacy and trading system will allow you to engage characters as allies, enemies or partners while competing over different islands and trade routes together on one big map. We will furthermore explore the 19th century with a story rich campaign, which will touch in many of the important aspects of that era. We cannot wait to give you more details about the story next year.

With the next articles on our Anno Union hub, we will dive in to certain aspects of these features and will give you insights about the current state of the game. While we have a clear vision about the complexity and features of the game, we want your experience and feedback to make a truly great Anno game. Please keep in mind that the game is over a year away from launch and that means that many of the features we mentioned here are all work in progress. It was important for us to show you the game as early as possible but that also means that a lot of content we will show is not representative for the final game, and that we won’t be able to show you new trailers or screenshots every week.

That said many of you are curious how we will use and implement your feedback. With upcoming blogs, we will talk about certain features and aspects we are working on and that is a good way for us to gather your ideas and input. We frequently mentioned live feedback sessions via voice chats such as Discord or Skype, that we will answer your questions in frequent video updates an invite you to talk to us in live podcasts and streams directly from our studio. As some of you might know, all that requires a lot of tech and organization in the background, so bear with us when it needs a bit more time until everything is ready to go.

What we would like to know from you now is what kind specific development insight would you like to see in future Anno Union blogs?